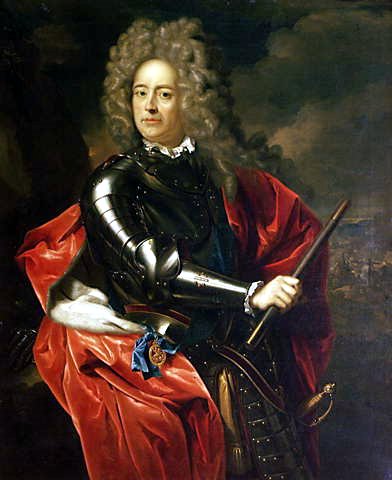 General John Churchill, 1st Duke of Marlborough, 1st Prince of Mindelheim, 1st Count of Nellenburg, Prince of the Holy Roman Empire, (26 May 1650 – 16 June 1722 O.S.), was an English soldier and statesman whose career spanned the reigns of five monarchs. From a gentry family, he served first as a page at the court of the House of Stuart under James, Duke of York, through the 1670s and early 1680s, earning military and political advancement through his courage and diplomatic skill.

Churchill's role in defeating the Monmouth Rebellion in 1685 helped secure James on the throne, but he was a key player in the military conspiracy that led to James being deposed during the Glorious Revolution. Rewarded by William III with the title Earl of Marlborough, persistent charges of Jacobitism led to his fall from office and temporary imprisonment in the Tower of London. William recognised his abilities by appointing him as his deputy in Southern Netherlands (modern day Belgium) before the War of the Spanish Succession in 1701 but it was not until the accession of Queen Anne in 1702 that he secured his fame and fortune.

Marriage to Sarah Jennings and her relationship with Anne ensured Marlborough's rise, first to the Captain-Generalcy of British forces, then to a dukedom. As de facto leader of Allied forces in the Low Countries, his victories at Blenheim (1704), Ramillies (1706), Oudenarde (1708), and Malplaquet (1709), ensured his place in history as one of Europe's great generals.

His wife's stormy relationship with the Queen, and her subsequent dismissal from court, was central to his own fall. Incurring Anne's disfavour, and caught between Tory and Whig factions, Marlborough was forced from office and went into self-imposed exile. He returned to favour with the accession of George I to the British throne in 1714, but a stroke in 1716 ended his active career.

Marlborough's leadership of the Allied armies fighting Louis XIV from 1701 to 1710 consolidated Britain's emergence as a front-rank power, while his ability to maintain unity in the fractious coalition demonstrated his diplomatic skills. He is often remembered by military historians as much for his organisational and logistic skills as tactical abilities. However, he was also instrumental in moving away from the siege warfare that dominated the Nine Years' War, arguing one battle was worth ten sieges.

Read Now
1
The Duke of Marlborough's speech to the Right Honourable the House of Lords
by Marlborough, John Churchill
Published 1711
Printed and re:printed at the Old Post-Office in Fishamble-street
Call Number: Loading...
Located: Loading...

Read Now
3
The french King's letter to the Duke of Marlborough, on his forcing the lines near Doway. And his Grace's answer
by Marlborough, John Churchill
Published 1710
printed fo W. Buttler near Soho-Square
Call Number: Loading...
Located: Loading...

Read Now
4
His Grace the Duke of Marlborough's letter to the Rt. Hon. Mr. Secretary Harley : together with other letters which passed between His Grace and the deputies of the States-General
by Marlborough, John Churchill
Published 1706
Printed by M. Jones in the Savoy
Call Number: Loading...
Located: Loading...

Read Now
5
The case of His Grace the D- of M- : As design'd to be represented by him to the Honourable House of Commons, in vindication of himself from the charge of the commissioners of acco...
by Marlborough, John Churchill
Published 1712
Printed by A. Baldwin in Warwick Lane
Subjects: '; “...Marlborough, John Churchill / Duke of / 1650-1722...”

Read Now
7
Windsor, August 13. 1704. The Lord Tunbridge arrived here this evening being sent by His Grace the Duke of Marlborough to Her Majesty : with the particulars of the late glorious vi...
by Marlborough, John Churchill
Published 1704
Printed by Edw. Jones in the Savoy
Call Number: Loading...
Located: Loading...

Read Now
16
The information against the Duke of Marlborough : and his answer
by Northey, Edward
Published 1712
London printed, and re-printed by Francis Dickson
Subjects: '; “...Marlborough, John Churchill / Duke of / 1650-1722 / Finance, Personal...”