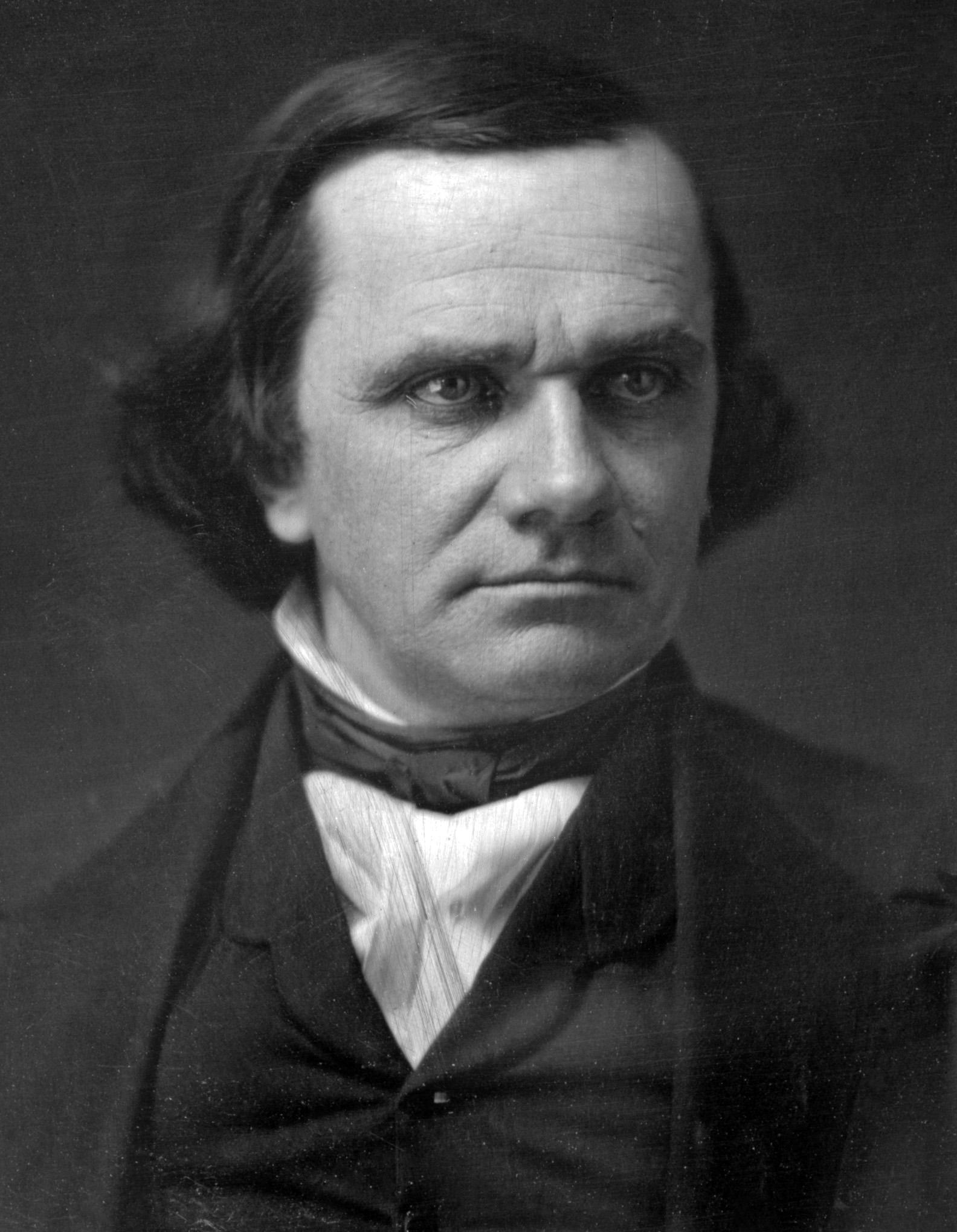 Stephen Arnold Douglas (April 23, 1813 – June 3, 1861) was an American politician and lawyer from Illinois. He was one of the Democratic Party nominees for president in the 1860 election which was won by Republican candidate Abraham Lincoln. Douglas had previously bested Lincoln in the 1858 Illinois election for the United States Senate, which is known for the Lincoln–Douglas debates. During the 1850s, Douglas was one of the foremost advocates of popular sovereignty, which held that each territory should be allowed to determine whether to permit slavery within its borders. Douglas was nicknamed the "Little Giant" because he was short in physical stature, but a forceful and dominant figure in politics.

Born in Brandon, Vermont, Douglas migrated to Jacksonville, Illinois, in 1833 to establish a legal practice. He experienced early success in politics as a member of the Democratic Party, serving in the Illinois House of Representatives and various other positions. He resigned from the Supreme Court of Illinois upon being elected to the United States House of Representatives in 1843. Douglas became an ally of President James K. Polk, and favored the annexation of Texas and the Mexican–American War. He was one of four Northern Democrats in the House to vote against the Wilmot Proviso, which would have banned slavery in any territory acquired from Mexico.

The Illinois legislature elected Douglas to the United States Senate in 1847, and Douglas emerged as a national party leader during the 1850s. Along with Henry Clay, he led the passage of the Compromise of 1850, which settled some of the territorial issues arising from the Mexican–American War. Douglas was a candidate for president at the 1852 Democratic National Convention, but lost the nomination to Franklin Pierce. Seeking to open the west for expansion, Douglas introduced the Kansas–Nebraska Act in 1854. Though Douglas had hoped the Kansas–Nebraska Act would ease sectional tensions, it elicited a strong reaction in the North and helped fuel the rise of the anti-slavery Republican Party. Douglas once again sought the presidency in 1856, but the 1856 Democratic National Convention instead nominated James Buchanan, who went on to win the election. Buchanan and Douglas split over the admission of Kansas as a slave state, as Douglas accused the pro-slavery Kansas legislature of having conducted an unfair election.

During the Lincoln–Douglas debates, Douglas articulated the Freeport Doctrine, which held that territories could effectively exclude slavery despite the Supreme Court's ruling in the 1857 case of ''Dred Scott v. Sandford''. Disagreements over slavery led to the bolt of Southern delegates at the 1860 Democratic National Convention. The rump convention of Northern delegates nominated Douglas for president, while Southern Democrats threw their support behind John C. Breckinridge. In the 1860 election, Lincoln and Douglas were the main candidates in the North, while most Southerners supported either Breckinridge or John Bell of the Constitutional Union Party. Campaigning throughout the country during the election, Douglas warned of the dangers of secession and urged his audiences to stay loyal to the United States. Ultimately, Lincoln's strong support in the North led to his victory in the election. After the Battle of Fort Sumter, Douglas rallied support for the Union, but he died in June 1861. Provided by Wikipedia

Read Now
5
A brief treatise upon constitutional and party questions and the history of political parties : as I received it orally from the late Senator Stephen A. Douglas, of Illinois
by Douglas, Stephen Arnold
Published 1866
D. Appleton
Call Number: Loading...
Located: Loading...

Read Now
6
Execution of United States laws : speeches of Hon. S.A. Douglas, of Illinois, delivered in the Senate of the United States, February 23, 1855, on the bill reported from the Committ...
by Douglas, Stephen Arnold
Published 1855
Printed at the Congressional Globe Office
Call Number: Loading...
Located: Loading...

Read Now
8
Speech of Senator Douglas, of Illinois, against the admission of Kansas under the Lecompton constitution : delivered in the Senate of the United States, March 22, 1858
by Douglas, Stephen Arnold
Published 1858
Printed by L. Towers
Call Number: Loading...
Located: Loading...

Read Now
9
Claim of Rob't M. and Stephen A. Douglas, of Rockingham County, North Carolina for their private cotton and other property taken, used and appropriated, in March, 1863, in Washingt...
by Douglas, Robert Martin
Published 1872
Powell & Ginck
Other Authors: '; “...Douglas, Stephen Arnold...”

Read Now
10
Political debates between Abraham Lincoln and Stephen A. Douglas in the celebrated campaign of 1858 in Illinois : including the preceding speeches of each at Chicago, Springfield,...
by Lincoln, Abraham
Published 1895
O.S. Hubbell
Other Authors: '; “...Douglas, Stephen Arnold...”