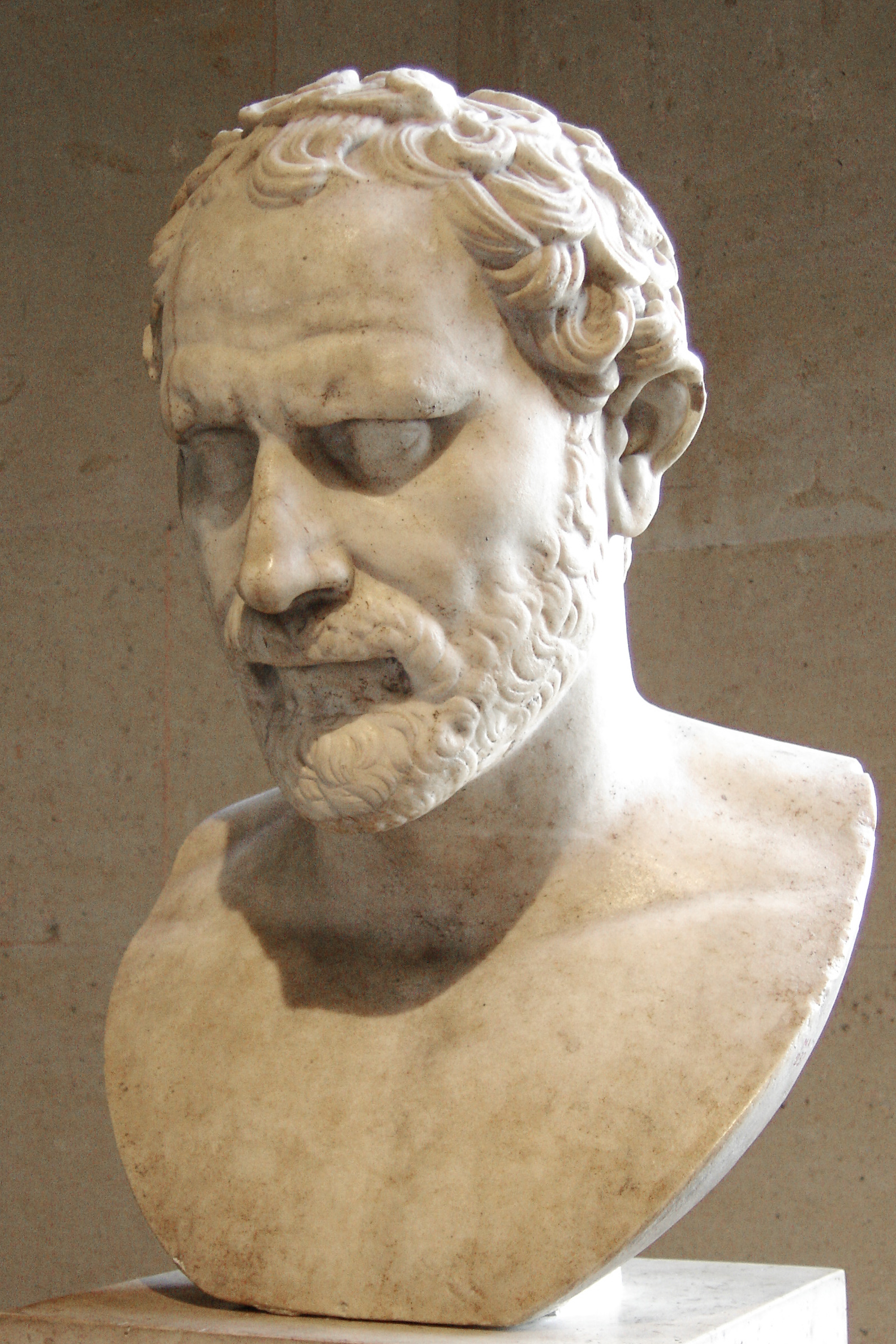 Demosthenes (; ; ; 384 – 12 October 322 BC) was a Greek statesman and orator of ancient Athens. His orations constitute a significant expression of contemporary Athenian intellectual prowess and provide an insight into the politics and culture of ancient Greece during the 4th century BC. Demosthenes learned rhetoric by studying the speeches of previous great orators. He delivered his first judicial speeches at the age of 20, in which he argued effectively to gain from his guardians what was left of his inheritance. For a time, Demosthenes made his living as a professional speech-writer (logographer) and a lawyer, writing speeches for use in private legal suits.

Demosthenes grew interested in politics during his time as a logographer, and in 354 BC he gave his first public political speeches. He went on to devote his most productive years to opposing Macedon's expansion. He idealized his city and strove throughout his life to restore Athens' supremacy and motivate his compatriots against Philip II of Macedon. He sought to preserve his city's freedom and to establish an alliance against Macedon, in an unsuccessful attempt to impede Philip's plans to expand his influence southward by conquering all the other Greek states.

After Philip's death, Demosthenes played a leading part in his city's uprising against the new king of Macedonia, Alexander the Great. However, his efforts failed and the revolt was met with a harsh Macedonian reaction. To prevent a similar revolt against his own rule, Alexander's successor in this region, Antipater, sent his men to track Demosthenes down. Demosthenes took his own life, to avoid being arrested by Archias of Thurii, Antipater's confidant.

The ''Alexandrian Canon'' compiled by Aristophanes of Byzantium and Aristarchus of Samothrace recognised Demosthenes as one of the ten greatest Attic orators and logographers. Longinus likened Demosthenes to a blazing thunderbolt and argued that he "perfected to the utmost the tone of lofty speech, living passions, copiousness, readiness, speed." Quintilian extolled him as ("the standard of oratory"). Cicero said of him that ("he stands alone among all the orators"), and also acclaimed him as "the perfect orator" who lacked nothing. Provided by Wikipedia

Read Now
2
Several orations : of Demosthenes, to encourage the Athenians to oppose the exorbitant power of Philip of Macedon...
by Demosthenes
Published 1702
printed for Jacob Tonson, within Grays-Inn-Gate, next Grays-Inn-Lane
Call Number: Loading...
Located: Loading...

Read Now
4
All the orations of Demosthenes, pronounced to excite the Athenians against Philip, King of Macedon : Translated into English, by T. Leland
by Demosthenes
Published 1777
printed for T. Longman
Call Number: Loading...
Located: Loading...

Read Now
6
The orations of Demosthenes, on occasions of public deliberation : Demosthenes. Volume the second. By T. Leland, D.D
by Demosthenes
Published 1763
printed for William Johnston, in Ludgate-Street
Subjects: '; “...Demosthenes / Early works to 1800...”

Read Now
8
Several orations : of Demosthenes, exciting the Athenians to oppose the exorbitant power of Philip King of Macedon...
by Demosthenes
Published 1744
printed for J. and R. Tonson and S. Draper in the Strand
Subjects: '; “...Demosthenes / Translations into English / Early works to 1800...”

Read Now
10
All the orations of Demosthenes, pronounced to excite the Athenians against Philip King of Macedon...
by Demosthenes
Published 1756
printed for W. Johnston, in St. Paul's Church-Yard
Call Number: Loading...
Located: Loading...

Read Now
11
Orations : of Demosthenes, translated by the Rev. Mr. Francis, with critical and historical notes
by Demosthenes
Published 1757
printed for A. Millar in the Strand
Subjects: '; “...Demosthenes / Translations into English / Early works to 1800...”