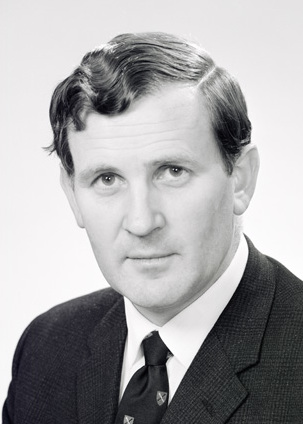 Peter Elliot Rae AO (born 24 September 1932, Launceston, Tasmania) is an Australian retired politician who represented the Liberal Party for the state of Tasmania in the Australian Senate. He served as a Senator from 1967 until his resignation in January 1986. He was subsequently elected to the division of Bass in the Tasmanian House of Assembly at the February 1986 election, serving until his defeat on 13 May 1989.

Rae served as a Shadow Minister with portfolios that included Industry and Commerce, Finance, and Education and Science.

Rae led a four-year investigation of the capital markets of Australia, particularly the Stock Exchanges. The "Rae Report" led to the establishment of what is now the Australian Securities and Investments Commission. He was also leader of several of the Australian delegations to European Parliament, the Council of Europe and NATO. Senator Rae worked to amend the Constitution Alteration (Senate Casual Vacancies) Bill 1977 to provide for direct election of replacement senators by Tasmanian-style countback, instead of the indirect party political appointment system that was eventually instituted.

Following his period as an elected member, Rae practised law at Rae & Partners law firm in Tasmania. In the term 1993-2004 he served as Chair of the Hydro-Electric Commission.

In 1999 Rae was made an Officer of the Order of Australia "for service to business and commerce, to the Federal and Tasmanian Parliaments, and to the Aboriginal community of Flinders Island."

Since November 2003, Rae was Vice President of the World Wind Energy Association and became President in October 2015. Rae is also Honorary Chairman of the International Renewable Energy Alliance (REN Alliance) which is the world alliance of the major world renewable energy associations (bioenergy, hydro, wind, solar and geothermal). He is on the Board of several of the other Alliance partners.

He was Vice Chairman of REN21 (2008-2013) and is a member of the International Jury of the Energy Globe Sustainability Awards.

He chaired sessions of the World Energy Conference which was held in Sydney in 2004 and was a key note speaker at the recent National Business Leaders Forum on Sustainable Development held in Canberra.

On 4 June 1991 he was granted the right to use the term "The Honourable" for life. Provided by Wikipedia

Read Now
1
The history of the late rebellion : rais'd against His Majesty King George, by the friends of the Popish Pretender. Containing An Account, as well of the Settlement of the Successi...
by Rae, Peter
Published 1718
printed by Robert Rae, and sold by him, and by Mr. John Martin in the Parliament Closs, Edinburgh, John Wilson in Glasgow, Bailie Duncan in Kilmarnock, and other Booksellers
Call Number: Loading...
Located: Loading...

Read Now
2
The history of the rebellion, rais'd against His Majesty King George I : By the friends of the popish pretender. Containing an account of the settlement of the succession to the Cr...
by Rae, Peter
Published 1746
Printed for A. Millar, opposite to Catharine-Street, in the Strand
Call Number: Loading...
Located: Loading...

Read Now
3
A treatise of lawful oaths, and perjury : Wherein the nature and obligation of promissory and assertory oaths is cleared; and the dreadfulness of the sin of perjury demonstrated, f...
by Rae, Peter
Published 1749
printed by W. Sands, A. Murray, and J. Cochran
Call Number: Loading...
Located: Loading...

Read Now
4
Gospel ministers Christ's ambassadors : A Sermon Preached at the Opening of the Provincial Synod of Drumfries, April 10th, 1733. By Mr. Peter Rae Minister of the Gospel of late at...
by Rae, Peter
Published 1733
printed by R. Fleming and Company, and sold by Mr. James M'euen and other booksellers in Town; and also at Drumfries and Sanquhar
Call Number: Loading...
Located: Loading...
Search Tools
Get RSS Feed
Share Search
Send by Email