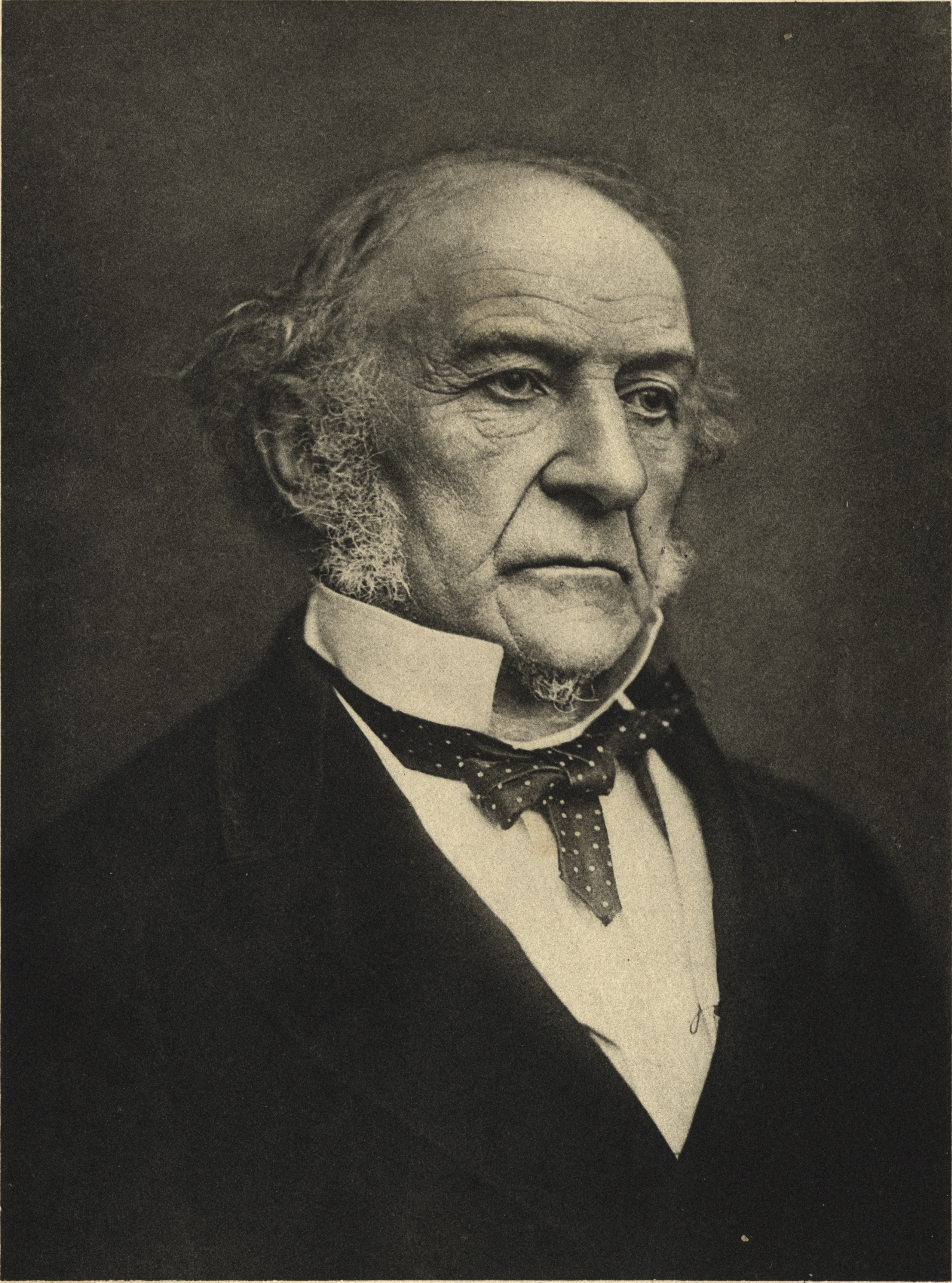 William Ewart Gladstone (; 29 December 1809 – 19 May 1898) was a British statesman and Liberal politician. In a career lasting over 60 years, he served for 12 years as Prime Minister of the United Kingdom, spread over four terms beginning in 1868 and ending in 1894. He also served as Chancellor of the Exchequer four times.

Gladstone was born in Liverpool to Scottish parents. He first entered the House of Commons in 1832, beginning his political career as a High Tory, a grouping which became the Conservative Party under Robert Peel in 1834. Gladstone served as a minister in both of Peel's governments, and in 1846 joined the breakaway Peelite faction, which eventually merged into the new Liberal Party in 1859. He was Chancellor under Lord Aberdeen (1852–1855), Lord Palmerston (1859–1865) and Lord Russell (1865–1866). Gladstone's own political doctrine—which emphasised equality of opportunity and opposition to trade protectionism—came to be known as Gladstonian liberalism. His popularity amongst the working-class earned him the sobriquet "The People's William".

In 1868, Gladstone became Prime Minister for the first time. Many reforms were passed during his first ministry, including the disestablishment of the Church of Ireland and the introduction of secret voting. After electoral defeat in 1874, Gladstone resigned as leader of the Liberal Party. From 1876 he began a comeback based on opposition to Turkey's reaction to the Bulgarian April Uprising. His Midlothian Campaign of 1879–80 was an early example of many modern political campaigning techniques. After the 1880 general election, Gladstone formed his second ministry (1880–1885), which saw the passage of the Third Reform Act as well as crises in Egypt (culminating in the Fall of Khartoum) and Ireland, where his government passed repressive measures but also improved the legal rights of Irish tenant farmers.

Back in office in early 1886, Gladstone proposed home rule for Ireland but was defeated in the House of Commons. The resulting split in the Liberal Party helped keep them out of office – with one short break – for 20 years. Gladstone formed his last government in 1892, at the age of 82. The Second Home Rule Bill passed through the Commons but was defeated in the House of Lords in 1893. Gladstone left office in March 1894, aged 84, as both the oldest person to serve as Prime Minister and the only Prime Minister to have served four terms. He left Parliament in 1895 and died three years later.

Gladstone was known affectionately by his supporters as "The People's William" or the "G.O.M." ("Grand Old Man", or, according to his political rival Benjamin Disraeli, "God's Only Mistake"). Historians often call him one of Britain's greatest leaders. Provided by Wikipedia

Read Now
6
Speech delivered in the House of Commons on the motion of Sir George Strickland for the abolition of the Negro apprenticeship, March 30, 1838
by Gladstone, William Ewart
Published 1838
J. Hatchard and Son
Call Number: Loading...
Located: Loading...

Read Now
9
Substance of a speech for the second reading of the Maynooth college bill in the House of Commons, on Friday, April 11, 1845
by Gladstone, William Ewart
Published 1845
J. Murray
Call Number: Loading...
Located: Loading...

Read Now
13
The practice and courts of civil and ecclesiastical law and the statements in Mr. Bouverie's speech on the subject, examined, with observations on the value of the study of civil a...
by Phillimore, Robert
Published 1848
W. Benning
Other Authors: '; “...Gladstone, William Ewart...”

Read Now
14
Gladstone on the income tax discussion on the income tax, in the House of Commons on 25th April 1884
by Hubbard, John Gellibrand
Published 1885
E. Stanford
Other Authors: '; “...Gladstone, William Ewart...”

Read Now
16
Letter to the Right Hon. Wm. E. Gladstone, M.P with the address to the jury by His Honor Mr. Justice Therry, at the opening of the First Circuit Court, at Brisbane, Moreton Bay, Ma...
by Therry, Roger
Published 1850
[s.n.]
Other Authors: '; “...Gladstone, William Ewart...”

Read Now
19
Letter to the Right Hon. W.E. Gladstone, M.P., president of the Board of Trade, &c. &c on the considerations asked from and offered to railway companies by government
by Lang, Gabriel H.
Published 1844
[s.n.]
Other Authors: '; “...Gladstone, William Ewart...”

Read Now
20
Letter to the Right Hon. W.E. Gladstone, M.P. president of the Board of Trade, &c. &c on the importance in a national point of view of railway extension, and the encouragement whic...
by Lang, Gabriel H.
Published 1844
[s.n.]
Other Authors: '; “...Gladstone, William Ewart...”