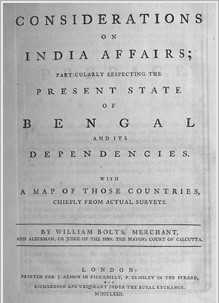 William Bolts (1738–1808) was a Amsterdam-born merchant active in India. He began his career as an employee of the British East India Company, and subsequently became an independent merchant. He is best known today for his 1772 book, ''Considerations on India Affairs'', which detailed the exploitation and despoliation of Bengal by the East India Company which began shortly after the Battle of Plassey in 1757. The observations and experiences he recorded offer a unique resource for scholars inquiring into the nature of early British rule in Bengal. Throughout his life, Bolts continued to propose and execute various trading ventures on his own behalf and in conjunction with various commercial and governmental partners. The ventures of individual traders like Bolts did much to spur governments and large corporations into the expansion of their own interests and empires. Provided by Wikipedia

Read Now
1
Considerations on India affairs : particularly respecting the present state of Bengal and its dependencies. With a map of those countries, chiefly from actual surveys. By William B...
by Bolts, William
Published 1772
printed for J. Almon in Piccadilly, P. Elmsley in the Strand, and Richardson and Urquhart under the Royal exchange
Call Number: Loading...
Located: Loading...

Read Now
2
Considerations on India affairs; particularly respecting the present state of Bengal and its dependencies. To which is prefixed. a map of those countries, chiefly from actual surve...
by Bolts, William
Published 1772
printed for J. Almon in Piccadilly, P. Elmsly in the Strand, and Brotherton and Sewell in Cornhill
Call Number: Loading...
Located: Loading...