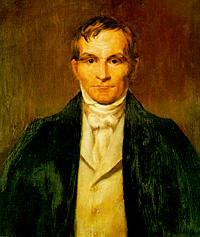 Philip Pendleton Barbour (May 25, 1783 – February 25, 1841) was the tenth Speaker of the United States House of Representatives and an Associate Justice of the Supreme Court of the United States. He is the only individual to serve in both positions.

Born in Gordonsville, Virginia, Barbour established a legal career in Gordonsville after studying at the College of William & Mary. Several members of Barbour's family, including Governor James Barbour of Virginia, went on to hold prominent political office. Barbour won election to the House of Representatives in 1814 as a member of the Democratic-Republican Party. He served a single term as Speaker from 1821 to 1823 and declined to seek re-election to Congress in 1824. Barbour returned to Congress in 1827 as an ally of Andrew Jackson.

Barbour served in Congress until 1830, when he accepted appointment as a judge of the United States District Court for the Eastern District of Virginia. President Jackson appointed Barbour to the Supreme Court in 1835 to fill a vacancy caused by the resignation in 1835 of Gabriel Duvall (December 6, 1752 – March 6, 1844) . Barbour served on the Court until his death in 1841. On the Court, Barbour generally supported Jacksonian principles and states' rights. Provided by Wikipedia